Is the Sesquicentennial of the Civil War a time to celebrate or to commemorate? For the British, the Fourth of July is no time to celebrate. Americans, however, view the day and the war that brought independence to the United States of America as a time and event to celebrate. For those who argue that the Civil War was not about slavery and elevate secessionist leaders as heroic figures, the Sesquicentennial is understandably a solemn commemoration. Those who resent such an elevation of these Rebel leaders are inclined to protest secessionist commemorations. Both groups are uninformed or ill informed on the activities of America’s African descent freedom fighters before and during the Civil War. Americans thus informed view the war as the event that brought “a new birth of freedom” to our young Republic, and for them the Sesquicentennial is indeed a time to celebrate. Therefore, with an understanding of the activities of these American freedom fighters, we can all find good reason to celebrate the commemorations of the secessions of the states that formed the Confederate States of America. 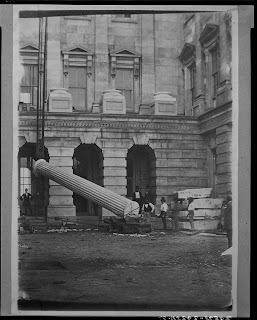 "Lincoln's Column"
After the election of Abraham Lincoln as the 16th President of the United States, African American laborers working on the construction of the U.S. Capitol dedicated this column to the president-elect.
Courtesy of the Library of Congress

Just over 150 years ago, Democrats in Ohio sought to nullify the results of the 1860 election because men of African descent, though prohibited by state law from voting, had voted for the Republican ticket. Solomon P. Chase was certainly capable of delivering such votes. Abraham Lincoln won the state’s electoral college by such a small margin that many Democrats believed it was the African American vote that gave the Republicans the state. This historical event was litigated, reported, confessed, ignored by mainstream historians and ultimately debated by those who were taught to ignore it whenever it was brought to their attention. Ignoring the fact that men of African descent voted in Ohio leads to a profound misunderstanding of the political activities, capabilities and intentions of Americans of African descent leading up to the Civil War.

Americans of African descent began preparing for a civil war years before Lincoln was elected. Dr. John S. Rock said on March 5, 1858: “Sooner or later, the clashing of arms will be heard in this country, and the black man’s services will be needed.” Rock declared that free and enslaved persons of African descent would be “wild with the enthusiasm caused by the dawn of the glorious opportunity of being able to strike a genuine blow for freedom.” When South Carolina secessionists called for a convention at Charleston in December 1860, Rock was certain the “clashing of arms” would soon be heard, and he rejoiced as the “glorious opportunity” emerged from secession.

On Christmas Eve, the South Carolina Convention passed a Declaration of Causes for Secession. They stated that the Republican administration that would take helm of the government in March believed “a war must be waged against slavery until it shall cease throughout the United States.” Determined to keep their profitable domestic institution, South Carolina’s political leaders “declared the Union heretofore between this State and the other States of North America is dissolved.” Quickly the South Carolina state militia moved to seize the federal forts in and around Charleston Harbor.

On the day after Christmas, Major Robert Anderson completed the transfer of his garrison from Fort Moultrie on the shoreline of Charleston Harbor to Fort Sumter in the harbor itself. South Carolina and other Southern states leaning toward secession responded to this movement of federal troops with outrage. President James Buchanan had promised that no such change in position would occur; thus, his Secretary of War John B. Floyd claimed that the move was against orders. Floyd was a secessionist sympathizer; and in a cabinet meeting on December 28, 1860, he almost came to blows with Attorney General Edwin Stanton over more than just the movement of the federal garrison to Fort Sumter. The next day Floyd resigned under accusations that he had sought to arm the secessionists by transferring weapons to Southern arsenals.

Frederick Douglass wrote that Buchanan had fostered “the state of disorder” and lacked the “virtue… to enforce the laws against the slaveholding women-whipping rebels of Charleston.” Douglass opined that the President was bound by oath of office to use force to keep South Carolina in the Union; but, he argued, Buchanan had virtually invited the slaveholding states to secede. Douglass stated that Lincoln would regard South Carolina “as one of the United States, and subject to the ‘Union, the Constitution and the laws.’” He also forecasted that the enslaved population of South Carolina would “prove the most serious check upon disunion.” Douglass viewed secession as an opportunity to end slavery while maintaining the supremacy of the Constitution and preserving the Union.

As the New Year of 1861 approached, Americans of African descent, such as Rock and Douglass, rejoiced for two reasons 1) Abraham Lincoln was about to take helm of the government and 2) South Carolina had seceded. They believed that Lincoln’s mission was to free the slaves, that South Carolina had to be conquered if the Union was to be preserved, and that their help would be needed to save the Union. Anxious young freedom fighters across the country waited to hear the “clashing of arms” and grew “wild with the enthusiasm caused by the dawn of the glorious opportunity” to strike for liberty.

One hundred and fifty years ago today, Americans seeking to secure the blessings of liberty for the enslaved were indeed celebrating. It was like celebrating because you got into the sudden death championship game. It was time to celebrate getting the opportunity, but it quickly became time to practice, drill, study and focus. The rebellion was certain to become a war that if the defenders of the U. S. Constitution won, slavery would be abolished. The celebration corresponded with the New Year, and resolutions set the agenda for the year ahead. Celebrate, commemorate, or protest? Protest ignorance by helping the uniformed become informed. With understanding, let us commemorate and celebrate the Sesquicentennial together as citizens of our indivisible Republic. We are commemorating important historical events and celebrating our nation’s “new birth of freedom.”