The false reports often advanced by leading scholars have nothing to do with a conspiracy. They have everything to do with inaccuracies. Whenever we make inaccurate statements or whenever they are attributed to us, we must correct them if we are to apprehend the truth. Defending our mistakes misleads those who trust us. I don’t want to appear right. I really want to get it right. Therefore, I welcome being corrected.

There are scholars like Noah Trudeau, on my "Delany Group Reading List", who I do not believe have advanced false reports. I also have great respect for William Gladstone. There are others, however, who have. See the Civil War Times June 2009 and read the article on the movie Glory. Notably, I think the movie was a great advertisement for the service of African descent soldiers during the Civil War. However, whoever says that it “was almost perfectly aligned with the historical evidence” is making a false report. (See Blue-Eyed Child of Fortune: The Civil War Letters of Robert Gould Shaw.)

We all make mistakes and must be willing to correct those mistakes if we are in the pursuit of the truth. In an earlier blog entry, I wrote that “Sergeant William Carney received the Medal of Honor on May 23, 1863." I should have written May 23, 1900. If I attempted to argue that my mistake is correct, then I would have problems with me. I would indeed be advancing a false report in order to appear right. I was wrong, but that’s an easy one. At one time I thought that Mary Elizabeth Bowser was a spy inside the Confederate White House. I was wrong. James Henry Jones was the spy inside the Confederate White House. There is no evidence that Bowser worked in the Confederate White House. I hated to drop that report, but the facts as I understand them today have compelled me to drop it.

Recently, I read that 75% of the soldiers in the 54th Massachusetts were college graduates. I even read that I made such a grossly inaccurate statement. The person attributing that statement to me was quoting a newspaper article. If I ever said that I misspoke. However, I most likely said over 75% of the 54th Massachusetts was literate. Hopefully, in the near future, I will become a hard target when my book is published. Then I will have a better opportunity to correct my own inaccuracies with help of good researchers who love primary sources. I can’t wait to get it right.

Some have asked for the newspapers that reported the capture of Richmond by United States Colored Troops. I refer them to the Philadelphia Press and the Washington National Republican, which in the evening extra on April 3, 1865 reads: 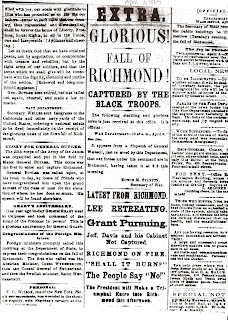