What Were They Watching for on Watch Night?


What Were They Watching for on Watch Night? 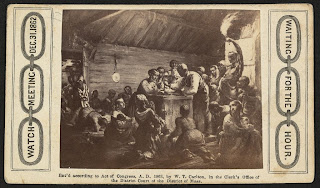 With great expectations, African Americans looked to January 1, 1863, as the day of jubilee.  They congregated in churches and around “praying trees” in secret locations across the country on the evening of December 31, 1862, to “watch” for the coming of the Emancipation Proclamation; thus, the tradition of “watch night” was born.  “It is a day for poetry and song, a new song,” wrote Frederick Douglass.  “These cloudless skies, this balmy air, this brilliant sunshine, (making December as pleasant as May), are in harmony with the glorious morning of liberty about to dawn up on us.”  President Lincoln had promised a proclamation emancipating slaves in the states in rebellion 99 days earlier; and on “watch night,” Americans of African descent faithfully “watched” for his proclamation to be issued on the 100th day.  In Boston, Douglass reported that “a line of messengers was established between the telegraph office and the platform at Tremont Temple.”  When what Douglass called the “trump of jubilee” was heard, “joy and gladness exhausted all forms of expression, from shouts of praise to sobs and tears.”
In Washington, Reverend Henry M. Turner, pastor of Israel Bethel AME Church located on Capitol Hill, wrote that it was in the churches of the District of Columbia where “expressions of sentiments” for the Emancipation Proclamation could be heard.   “Watching” for the issuing of the final Emancipation Proclamation was not simply “watching” for emancipation.  African Americans were “watching” for the opportunity to fight for freedom.  The enslaved in the District had already been emancipated, but they prayed for the freedom of all.  Indeed, they were willing to fight for the freedom of all.  “Several colored men in this city,” wrote Reverend Turner, “say they are now ready for the battlefield.  Abraham Lincoln can get anything he wants from the colored people here from a company to a corps.  I would not be surprised to see myself carrying a musket before long.”  Later that year, Turner would recruit hundreds of men and become a chaplain in the Union Army.
It is important that we in the 21st century understand that the Emancipation Proclamation did not simply free the slaves.  It declared free slaves in the states in rebellion.  It was in Lincoln’s words “a fit and necessary war measure” for preserving the Union.  Lincoln wrote in the Proclamation that it “was warranted by the Constitution upon military necessity.”  The military necessity that led to the Emancipation Proclamation meant that the help of African Americans was needed to save the Union.  Jefferson Davis, the president of the Confederacy, declared in January 1863 that the “proclamation is also an authentic statement by the Government of the United States of its inability to subjugate the South by force of arms.”  In the 19th century African Americans, the leadership of the Confederacy, and the leadership of the Federal government understood that the Emancipation Proclamation was a military necessity that explicitly called on the help of African Americans.
Unequivocally, Lincoln believed that African descent soldiers were critical to Union success.  The President wrote to General Ulysses S. Grant in August 1863 stating that he believed African descent soldiers were “a resource which if vigourously [sic] applied now, will soon close the contest.”  Grant replied stating that he shared the President’s belief declaring that “by arming the negro, we have added a powerful ally.”  In response to a supporter who opposed emancipation and the use of African descent soldiers, Lincoln wrote, “I know, as fully as one can know the opinions of others that some of the commanders of our armies in the field, who have given us our most important successes, believe the emancipation policy, and the use of colored troops, constitute the heaviest blow yet dealt to the rebellion; and that at least one of those important successes could not have been achieved when it was, but for the aid of black soldiers.  Among the commanders holding these views are some who have never had any affinity with what is called abolitionism, or with Republican party politics, but who hold them purely as military opinion.”
Therefore, when we celebrate and commemorate “watch night” and the 150th anniversary of the issuing of the Emancipation Proclamation, we should appreciate the importance of African Americans in saving the Union and freeing themselves.  Such an appreciation is to understand the practical significance of the Proclamation as the people who made the history understood it.  We are commemorating the “watching for” the hour that the government’s policy aligned with prayers of liberation and celebrating African descent patriots being armed with the Emancipation Proclamation.  As we gather in churches, synagogues, and mosques in prayer across the country on “watch night;” we should appreciate that with faith and courage on December 31, 1862, Americans of African descent were “watching for” the opportunity to secure “the blessings of  liberty for themselves and their posterity” under the banner of the U. S. Constitution.  With the support of the Federal government, they were deployed as enforcers of the Emancipation Proclamation.  Indeed, January 1, 1863 was a day of Jubilee not because the slaves were set free but because the enslaved were called upon to save the Union and armed accordingly with the legal authority to set themselves free.
Posted by African American Civil War Museum at 3:49 PM 1 comment: