Questions from a 7th Grader Major

This month, I had the pleasure of speaking at Coppin State University in Baltimore, Maryland. One of the attendees was an exceptionally bright 7th grader by the name of Ime Essien. After asking me some very good questions at the program, he sent me an email with more questions. I read his email at midnight and felt compelled by the eloquence of his request to reply immediately. I have included his email request along with his questions and my answers.

I am the seventh grader, Ime Essien, that came to your lecture at Coppin State University. Thank you for speaking with me about African American soldiers in the Civil War and for the Delany Group Reading List. Your lecture was amazingly helpful for my project. You also have a great knowledge and background about the Civil War. You gave me a lot of important information that I did not already know. I am working on the History Day Project about the success of using African American soldiers in the Civil War. Here are the interview questions I mentioned to you in the attached document. Some of the questions you have already answered in your lecture but I need to quote you in my research paper. I hope you have the time to read and respond to the questions. Thank you again.

By “black” I understand that you are speaking of Americans of African descent. As a political scientist, I do not accept “black” as a scientifically and culturally accurate description of person of African descent. Therefore, I deleted the word “black” in your questions for the sake of cultural accuracy and good science. The difference in the terms is not simply semantics. It is a question of scientific approach and cultural accuracy.

Frederick Douglass’ petition was important in that it supported the requests of military commanders. Based on prudent military decisions, “necessary war measures”, Abraham Lincoln worked to get the legislative authority to raise African descent units because he
was made aware of their fighting abilities, and these highly motivated freedom fighters were needed to save the Union. Douglass helped in the legislative campaign or rather lobbying campaign. (See his editorial “The War and Slavery” which appeared in the Douglass’ Monthly of August 1861.) Frederick Douglass was important as the editor of a widely read journal. However, as a consequence of the physical and mental abilities of African descent soldiers, General U. S. Grant contributed far more significantly than any other lobbying campaign including Douglass’s. The 4Ls, Lincoln Legal Loyal League, provided very capable soldiers, guides, scouts and spies to Grant’s army during his Vicksburg Campaign. Many of these men were like their progeny today highly intelligent and elite athletes. William Howard Day, Martin Delany and Moses Dickson are the African Americans you should research in order to understand how these highly capable soldiers were recruited and trained. Delany opened a recruiting office in Chicago in 1863. He and John Mercer Langston were the most prolific recruiters of these elite soldiers/athletes. The African descent soldiers who fought with Grant in his Vicksburg Campaign provided the most important reason for more African descent units to be created.
There were less than 200 African descent commissioned officers during the Civil War. Soon after the organization of the first African descent regiments, there were African descent officers and noncommissioned officers who commanded troops in combat. According to the commanding officer of the 33rd USCI, initially organized as the 1st South Carolina, Colonel T. W. Higginson, Sergeant Prince Rivers was far more competent as a commander of patrols and raids than any of Higginson’s officers. (See Higginson’s book Army Life in a Black Regiment). Hundreds of African descent
noncommissioned officers were in de facto command of their troops on the company level. James Bronson, Powhatan Beaty, Milton Holland and William Pinn were noncommissioned officers who earned the Medal of Honor while commanding their companies at the Battle of New Market Heights on September 29, 1864. Two African descent regiments had African descent officers in command (Major Martin Delany 104th USCI and Lieutenant Colonel William Reed 35th USCI), but only one of those officers led his regiment into battle. Lt. Colonel Reed was the executive officer of the 35th USCI and was the acting-commanding officer of the regiment during the Battle of Olustee in February 1864. Reed was killed in action (KIA) on that Florida battlefield. 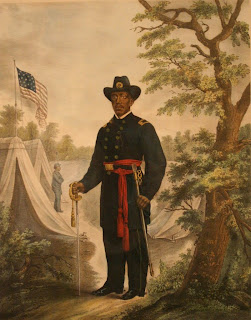 Major Martin R. Delany, commanding officer of the
104th US Colored Troops, was one of 149
African American officers during the Civil War.

2. What was the difference between the African descent units fighting for the Union and the Confederacy?

3. How was the Emancipation Proclamation an important influence for the Union?

General Grant observed that it added a “power ally” to the Union war effort. George Albright said that he was a runner for the 4Ls with the responsibility of taking the word to “secret gathering” that it was the day of the Jubilee and now time to aid the Union. Like the members of the 4Ls, the Emancipation Proclamation “added a powerful ally,” men who were eminently qualified to be soldiers, to the Union cause. African descent soldiers thus armed were made legal liberators by the Emancipation Proclamation. That would be like adding the top athletes in the NBA or NFL to your roster.

4. Why were African descent units created for the Union?

The rebellion of the Confederate States was militarily promising in July 1862. After the “greatest disasters of the war,” African descent units were organized “as a fit and necessary war measure to suppress said rebellion.” Abraham Lincoln states this in the Emancipation Proclamation. Therefore, African descent units were created to preserve the Union, the paramount objective of the federal government during the Civil War.

6. Why was President Lincoln against African descent soldiers in the beginning of the Civil War?

From the primary source evidence, it is clear that President Lincoln supported the legislation authorizing the use of African descent troops. After Congress passed the required legislation, Lincoln’s War Department immediately moved to organize African descent soldiers and deployed them in combat. The reason why many scholars claim that he was against raising African descent regiments is because they are critical of him for not subverting the Constitution by ordering their recruitment at the beginning of the war and such scholars focus on almost humorous Lincoln statements to support their opinion, which is not supported by the records of Lincoln’s actions. Frederick Douglass admonished us to evaluate Lincoln’s commitment to the effort of emancipation by comparing what Lincoln says to what he does. Lincoln does support the legislation to arm men of African descent; Lincoln does deploy African descent soldiers in combat; and Lincoln does give them credit for helping to suppress the rebellion, saving the Union and winning the war. The evidence from official records is clear that Lincoln was not against arming men of African descent.

7. What was the effect of African descent units winning battles for the Union?

General John Alexander Logan wrote that the battle cry of African descent soldiers, “’Remember Fort Pillow!’ – inspired them to deeds of valor, and struck with fear the hearts of the Enemy.” (See The Great Conspiracy by John A. Logan.) Confederate soldiers near the end of the war who were defeated on many battlefields by African descent soldiers grew more reluctant to fight. They deserted at a very high rate.

8. What was the first African American unit in the Civil War?